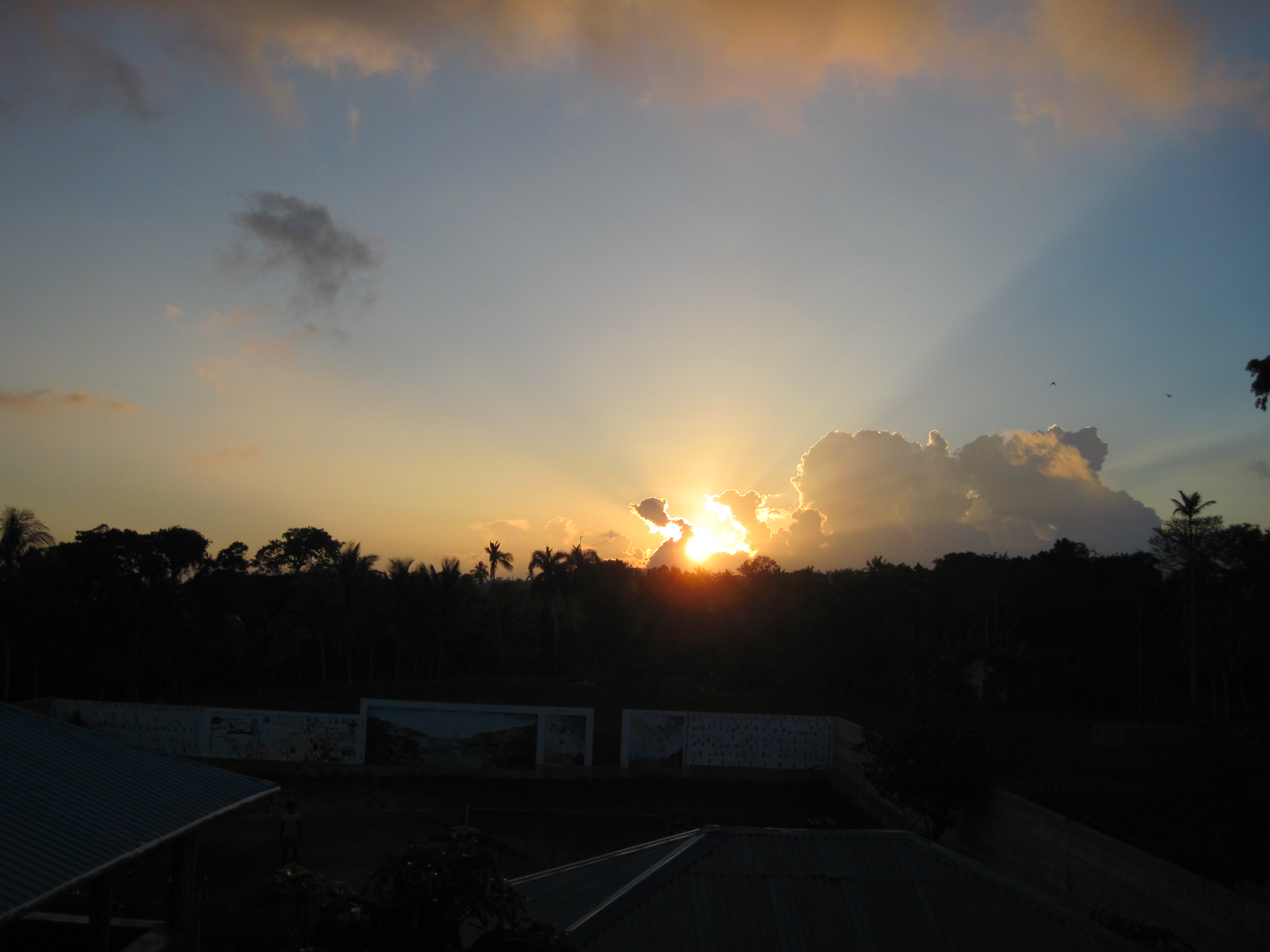 January 12, 2016 marks the 6th anniversary of the big earthquake, the “goudougoudou” in Haiti. To mark this important day and celebrate all the progress that has been made, this Modern Day Church Lady is proud to feature my first guest blogger, Valerie Mossman-Celestin, Executive Director of Haitian Artisans for Peace International.  In her post, “Goudougoudou. The Thing. Earthquake,” Valerie gives a moving personal account of the 2010 earthquake and its hopeful aftermath. 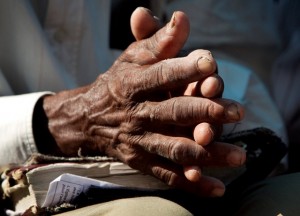 Six years hence, I am still silent, groping for words to express the inexpressible.

No, I wasn’t there. I’m not an intimate member of that collective memory. It is not my story to tell and yet, it is.

Recalling January 12, 2010, first came disbelief, denial: “An earthquake in Haiti?! That can’t be right!” My husband, Jacson and I grab our phones and start dialing every number we know. No answer. We peer into the darkness beamed through the tv screen and face the long sleepless night ahead, praying to see life in the dawn. And for the phone to ring. 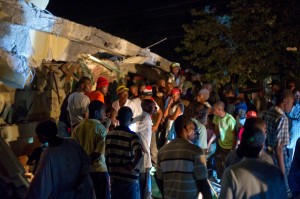 Out of the morning ‘fog’ emerges an image of the Caribbean Market, or rather, what remains. Can it be? Se vre? Images of living in Port-au-Prince flash before me. It’s Saturday, market day, and I hand out a collection of backpacks and sacks to friends. We catch the “taptap” and go to market. My friends haggle with ti machons for fresh vegetables outside but we go into Caribbean Market for other staples. Then, our bags bursting, we press back through the crowds to head home and start cooking. It is a good day, full of life and laughter. Now, this flattened skeleton of a building, a stranger to my eyes, swallowed up better than 100 ‘saints’ in its belly. I grieve with the families. 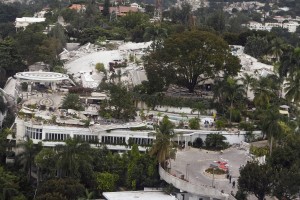 Next, Hotel Montana. My stomach clenches at the horror of the images. I had no idea at the time that United Methodist colleagues and friends were among those trapped beneath the rubble. They were in the lobby. It was a gorgeous lobby, full of light! The Hotel Montana was where Jacson and I took our families for rehearsal dinner and where we returned to honeymoon. A place of joyful memories now overshadowed with death. One magnificent tree stands out in the landscape; its roots deep enough to defy goudougoudou.

Finally, the powerful images of the National Cathedral and the National Palace shattered. Shattered! It was devastating. Defeat. 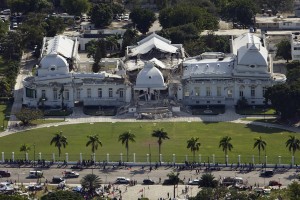 I was numb, silently thinking, “if that is the condition of the National Palace, who could have survived?”

I brace for the worst. The phone did not ring. 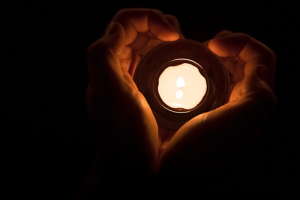 What struck me immediately that night was that you could have heard a pin drop. Tension was high, as people prayed and hoped that their loved ones were not among the mounting death tolls and bodies pushed into unmarked graves. Everyone kept their cell phones on. One lone cell phone rang. The young woman answered the call, then screamed and ran out into the snow and dropped to her knees, weeping and wailing. We all hugged our families a little closer that night. And waited for our call.

Gradually, the calls came. One of Jacson’s family members was in the second story of a school in Jacmel and a classmate pushed her off the balcony. She was injured but one of only two survivors. All our other family members, miraculously, were unharmed physically. We were incredibly grateful but remained in deep shock, grief and depression. Those around us did not understand the deep sense of Haitian ‘solidarity’, particularly among the poor: what happens to one, happens to all. 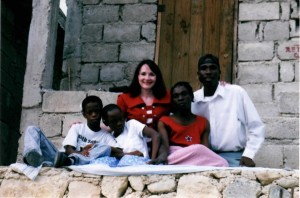 The last call was from friends who were as “family.” Denise, the family matriarch, had received fatal crush injuries when a wall fell on her. She was out “looking for life,” going to buy peanuts to make peanut butter to sell in her roadside business. Her son searched along her path, digging her out of the rubble and carrying her home.

He got her to a hospital the next morning but the hospital had no resources to treat her, nor even medication to dull the pain. She was sent home to die in the cinder block house, the kind that adjoin one another and dot the landscape in Port au Prince. The house, in her words, “that love built”; we built that house together. Denise was a prayer ‘warrior,’ carrying photographs of my family to pray over them, praying through my father’s cancer, praying through good moments and bad. Gone, not so much from a ‘natural disaster’ but from the manmade disasters in Haiti that have lead to substandard construction, absent health care and rampant poverty.

There was an outpouring of cash and humanitarian aid volunteers. Warnings came just as swiftly to stop the tsunami of untrained aid workers. But for those of us who had relationships…we needed to embrace our friends and family in Haiti. Hold them close. Grieve and heal together. There is power in ‘touch’ that no social media site can replace. 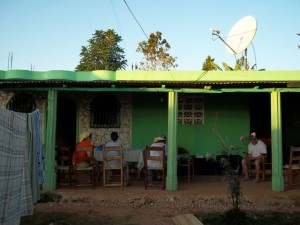 I traveled to Haiti six long weeks after. The defining moment to me was when a woman came to Paul’s porch in heavy labor. We had no clinic. Even the volunteers who had traveled with me were tasked with building their own bunk beds.

We had blue tarps. Our nurse volunteers improvised with these tarps on the open, bare concrete porch to create a makeshift delivery room. She had her husband and a young daughter with her. A line of curious children peered through the seams in the “walls” of the blue room.

The woman’s placenta ruptured and she began to hemorrhage. Our only option was to call a ‘taptap’ and put the woman in the back of this covered pick-up. The dirt road was deeply rutted with potholes and rocks. The hospital was in the city, at least 45 minutes away, and was overrun with persons who sustained injuries in the earthquake. The prospects were not good and we knew she had not beaten the odds when the driver returned to the front gate a mere 20 minutes after departure. The mom was alive but the driver held a wrapped infant and asked “where is your garbage?”

Back in the States, I kept returning to that day and thinking of the dreams the artisans had shared with me about the kind of community they wanted to raise their children in, their repeated requests for maternal care and greater access to education and jobs. I would think “that’s a nice project…for someone else!” I was also deeply disturbed by the vast amount of charitable aid arriving on Haiti’s shores. We are great at giving stuff! My greatest fear what that Haiti would forever lapse into dependency.

More than ever, the people of Haiti needed advocates to lift, lift, lift!

Lift with affirmation and positive images. Lift with opportunity. Lift with growth. I reflected on the quote attributed to Marianne Williamson, “Your playing small does not serve the world. There is nothing enlightened about shrinking….” 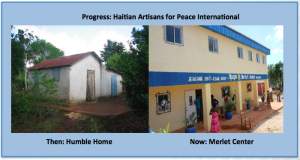 Six short years ago, this was all bare ground and a humble home.

We now have a children’s park with a pavilion, Merlet Center for our artisans, classes in ESL and computer and more. In 2015, we added Felisane Health Center and expanded our maternal care. ‘Peace Inn’ – the home with the bare concrete porch – has tripled in size to accommodate international guests.
We enter into 2016 hopeful, determined and inspired. We are starting more ESL / computer classes with aspirations to offer new course work for students and artisans. We continue to improve the capacity of our facilities with solar energy and to research and implement technology to link health staff on a mountain to health professionals outside the community through telehealth. We offer formation to children through Peace Pals, 4H, Nouvel Etwal and a relationship with the Mizak National Elementary School. New visions for expanding our facilitation of entrepreneurs and the growth of new businesses is on the horizon.

One thing remains constant: our commitment to God’s ‘shalom’ of ushering in wholeness, healing, and the kindom of God, in the present tense. 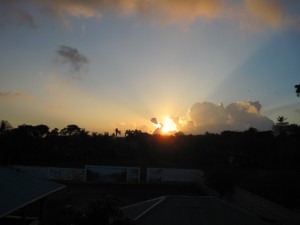 Join us in ‘looking back, moving forward’ in 2016.  Through your gifts, your prayers, your presence—and if you have been to HAPI—your witness!