Separation of Self from Stuff

In 2016, I came to terms with how connected my sense of self was to my stuff, particularly my clothing. I struggled to get rid of anything! I even kept clothes that had stains or no longer fit, because I might some day fix them, lose weight or just like them better. This post talks about how the Marie Kondo tidying book combined with a Lenten determination to focus on what mattered to me, helped me get a divorce from my stuff!

Marie Kondo Does Lent: Separation of Self from Stuff 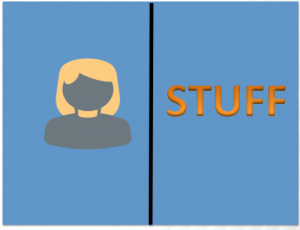 Growing up as a mainstream Protestant, I always thought of Lent as a Catholic holiday. I was glad Protestants were spared the practice of giving up something you really liked for 40 days.
Although I am a disciplined person, I struggle with the concept of denying myself. I grew up in an affluent family, but my parents were not into material things. They scoffed at people who visibly spent money and scoffed at me for wanting things so badly.
So once on my own, I filled my closet to the brim with clothes. I had my own money, so no need to deny myself unless there was a good reason, and there seldom was! I worked over 50 hours a week, had two young kids and lots of responsibility. I deserved those clothes! After 3 decades of unrestrained shopping, I ended up with clothing spread between 5 closets, 3 dressers and countless unmarked plastic bins in the attic. I had the space, why limit myself?
But shopping for clothes was never 100% pleasurable. I often got this weird adrenaline rush that was not exactly pleasant or unpleasant. So many choices, I wanted to make the right choice, I didn’t want to miss anything. I was FOMO before there even was FOMO. So if there was a choice, I didn’t make it, I took both. I had to think of a reason NOT to get something.
Returning from a shopping trip, I often felt deflated. I could hear my parents’ sniggering disapproval in my head. My internal voices fought back valiantly with arguments about what a deserving person I was. I was worthy. To deny myself was to go back to the little girl who felt unworthy, not quite enough.
Despite having hundreds of outfits, I found myself zeroing in just a few to wear. It was just too much effort to find anything. On the occasions I wanted to branch out, say to find that great Japanese jacket with the big red and purple spots on it, I had to go on a virtual safari of my house.

Even when I gave up physically looking for it, the missing jacket took up a lot of mental space. Did I leave in at the Hyatt on a business trip? Is it balled up in a suitcase somewhere? Or did the dry cleaner lose it? This managing of stuff was taking a toll. But it was so hard to part with it all. Having less stuff was in some perverse way a sign of being less. Giving up my stuff was somehow giving up on myself.
Marie Kondo, in her book the life-changing magic of tidying up, attacks this issue head on saying, “just because you dispose of something does not mean you give up past experiences or your identity.” In other words, less stuff did not mean I was less.
Separation of Self from Stuff is a micro version of separation of Church and State concept. The commonality being that without a strict dividing line between the two, there is a lot of pain and heartache.
And to me, that is what Lent is all about, a time to give up on old concepts that are holding me back, making me feel unworthy. Taking the time to untangle Self from Stuff. To, as my Pastor says in his Ash Wednesday sermon, take the time to “reboot, to rethink, to restart, to notice, to celebrate, to change things for the better.” To make sure I have a strict dividing line between Self and Stuff.