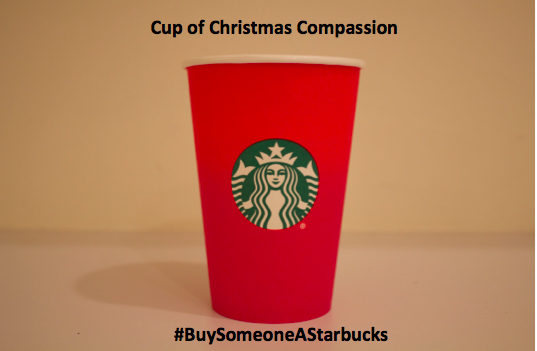 What’s really behind the Starbucks Brouhaha?

I recently got a Starbucks coffee in a red cup and thought, “oh, it’s Christmas already!” 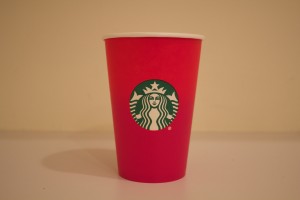 The red cup with its green and white logo telegraphed Christmas to me. So did the jewel-toned red and green bags of Christmas Blend Coffee that lined the shelves like festive macaroons in a French pastry store. 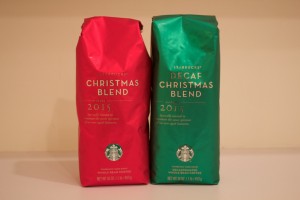 So it came as a shock to me that others viewed the red cup as an Anti-Christmas statement.

Suddenly the Starbucks furor was everywhere: in Facebook, in Time magazine and in Ad Age. The requisite twitter hash tag emerged: #MerryChristmasStarbucks. My pastor received emails telling him to respond with “Baby Jesus” or “Merry Christmas” when the Starbucks’ barista asked for a name to put on a cup. Even Donald Trump got in the act.

My knee-jerk reaction was to think this anti-Starbucks stance was just the foaming at the mouth of stupid people. After all, snowmen, reindeer and Christmas trees aren’t even Christian symbols. Even if these were Christian symbols, America is now a more pluralistic society, so get over it! This Modern Day Church Lady thoroughly enjoyed the snarky repartee!

But then a recent New York Times story about the documented spike in middle-aged white mortality put an end to my “holier than thou” snickering. 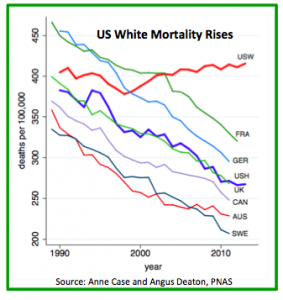 The increase in deaths was caused by increases in suicide, drug/alcohol addiction and liver disease. This constellation of causes signaled to the author, Angus Deaton, that “a sense of deep despair that has fallen over this segment of the population.” He speculated that middle-aged white Americans “have lost the narrative of their lives.” That there is a “a loss of hope, a loss of expectations of progress. 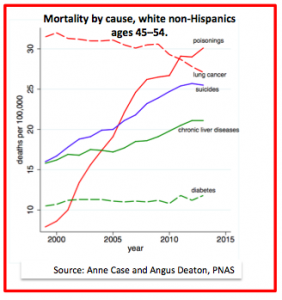 To many white middle-aged Americans, the Reindeer-less Starbucks cup was just another reminder of their diminished prospects and status. It is tempting to see this slide in the fortunes of white Americans as justified comeuppance. A young white male friend of mine was told as much when he shared his personal struggle with one of his African American customers.

But suffering isn’t a zero-sum game.

So for me, the uproar around the simple red Starbucks cup is now a reminder for the need for compassion. Instead of joining the Starbucks Snarkfest, why not #BuySomeoneAStarbucks as a show of Christmas compassion? 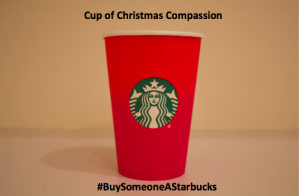 When people get upset over a paper cup, it must mean they are really hurting.