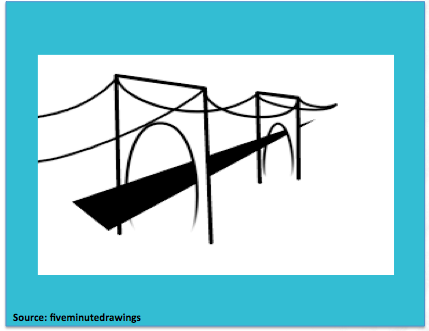 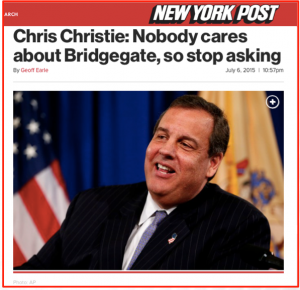 Bridgegate is in the news again as Christie’s fellow Presidential candidate, Rand Paul, mentioned the scandal in the most Republican recent debate saying, “when we think about the judgment of someone who might want World War III, we might think about someone who might shut down a bridge because they don’t like their friends.”

As you may recall Bridgegate is the name for the scandal where lanes leading to the George Washington Bridge were closed during the busy morning commute on the first day of the 2013 school year. The lane closure was an alleged retaliatory strike by Christie loyalists against Fort Lee’s Mayor Mark Sokolic for not supporting Christie in the gubernatorial election.

Bridgegate bugs me much more than the recent Albany scandals where elected officials used their office for personal financial gain.

I thought long and hard about why Bridgegate feels so much worse to me.

I think it’s because Bridgegate used innocent people (the Fort Lee commuters) to send a message to a politician who simply hadn’t supported him. This vindictive move seemed like something out of a mobster movie, where the mob sends a message by hurting a family member.

If Christie appointees and staff members are willing to shut down a public roadway and endanger lives because of a relatively minor political squabble, what would they be willing to do for something more substantial?

Many saw Morrow Memorial Church’s decision to assist a Syrian refugee family in setting up a new life here in New Jersey as an act of defiance. That was always the angle reporters took whenever they interviewed our minister. But Morrow Church members like me were just trying to live out our Christian values. Check out the MSNBC coverage of our actions.

The Christie administration proved itself to be very creative in thinking of ways to retaliate against a political opponent. What’s to stop them from retaliating against our church? Probably a bit of a melodramatic thought on my part, but over the last year, the tint in my rose colored glasses has faded considerably.

I have never felt afraid of my own government. But Bridgegate, combined with all of the reported police brutality against African Americans produces a nagging sensation in my gut. When I see a car stopped by the police, I find myself craning my neck around to see who is behind the wheel. What is their ethnicity? Are they okay? 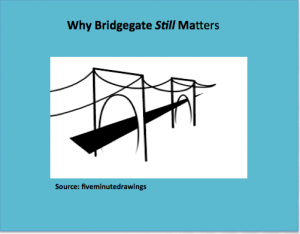 So that’s why Bridgegate matters to me. It has eroded my trust in my own government.

I don’t know whether to be more embarrassed about my past naïve unquestioning faith in American authorities or saddened that my trust in them is slowly corroding away.