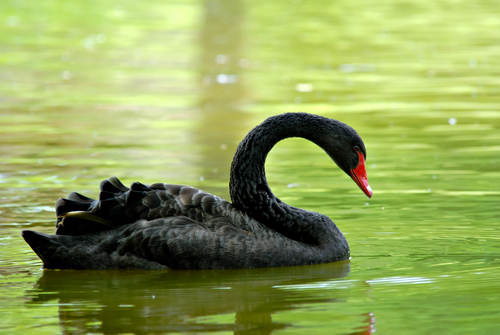 The Hopes and Fears of Living in a Black Swan World

As the church lady steels herself for the results of the mid-term elections, she is both wary of and hopeful for the unpredictable black swan moments that might emerge from the upcoming election.

We live in a world of never-ending black swan moments. The upcoming election is no exception.

Donald Trump’s 2016 election was a shocking black swan event, something unexpected, unprecedented  and for me, beyond belief. On election night, 10 of us had gathered at the house of a friend in what was supposed to be a celebratory dinner for the election of the first female president.

We had seen a lot of things go our way in the last few years like health care reform and the legalization of gay marriage. The election of Hillary Clinton seemed like a foregone conclusion to us, just the next logical step in the adoption of a more liberal agenda. The stew simmered, wine bottles were opened and the electric excitement we all felt could have powered the whole house.

But around 9:30 pm, the election results started veering in an unexpected direction. Those at the party more schooled in the electoral college got increasingly quiet as they wrestled between their hopes and their knowledge. By 10:30, couple after couple peeled away from the “party,” too shaken to want to be around other people, even good friends.

Returning home, I couldn’t face the inevitable while my husband stayed up to watch to the bitter end. Towards morning I drifted into one of those dream fugue states. I dreamed about waking up and asking my husband about the election outcome. In my dream he told me “Clinton won, it was really close, but she pulled it out in the end.” Upon fully waking at 5 am (my husband now asleep), I made a beeline to my computer to confirm what I had just dreamt, only to be splashed in the face with the cold reality of Donald Trump’s election.

I approach watching the upcoming election results with extreme trepidation. My friends decided that we’d all eat dinner at our own homes this election. I look at the polls, but they don’t comfort me in the way they used to, even when they are pointing in a direction I like.

But no matter what happens, whether I get the congress of my hearts-desire, or am sorely disappointed, I can count on one unfortunate white swan, that the President will have something divisive to say, once again spewing toxic rhetoric that like acid on people’s sense of decency. While black swan events are usually unwelcome, here is a case where I hope and pray for a little black swan of civility.

As the horrible tragedies of the past weeks have shown us—the pipe bombs to prominent Democrats, the targeted killing of African Americans in a grocery store and the assassination of worshippers in the Tree of Life synagogue—divisive words have consequences.

But I know the opposite is true, that positive words can unify and comfort.  I found the vigil I attended last week for the victims at the Tree of Life synagogue to be a soothing balm for the soul.

It is hard not to focus on all the negative words that have swirled around us this election season.  I desperately try to cling to the words that my pastor Brenda Ehlers uttered earlier this year, when she said, “Have faith. Remember, this isn’t’ God’s first rodeo.”

I sure hope he/she/they have been practicing their lassoing skills!